As was said in the last post, I will continue to make the KPop Stars Dress-up game. The games are made in Photoshop and each item has several layers. For example, a blouse has 2 layers of custom color and 1 layer that contains all the shading. So a game easily contains 300 layers, which can be considered a heavy file.

I currently have a computer that has a really good configuration for working with graphics. But my processor is very old, it is a 4th generation Intel, which I bought 7 years ago. And I believe that this is affecting when you paint in Photoshop. After brushing, Photoshop freezes and after 20 or 30 seconds, it works again. This breaks the pace of work a lot and I was already going crazy without solving this problem. I thought the problem was the number of layers in the file, but even using only one layer in a new file, this crash occurred.

I researched on several forums, including Adobe forums with other artists with the same problem and all the solutions suggested to me did not work. I activated and deactivated a video card and increased the memory cache for Photoshop, but the problem continued.

I was almost thinking about buying Clip Studio Paint, which many people talk about well and only need to pay for the product once, unlike Adobe, a monthly subscription.

Until I remembered Krita, which is a free digital painting program and that I had used before to teach online drawing lessons.

I opened the file in Krita, with all its 300 layers and I was able to paint without any problem! No crashes, no screen freezes, everything is beautiful! The workflow is still a little strange in Krita because many tools do not work exactly as in Photoshop, but just being able to paint without having to wait half a minute between a brushstroke and another is already seen as a victory! 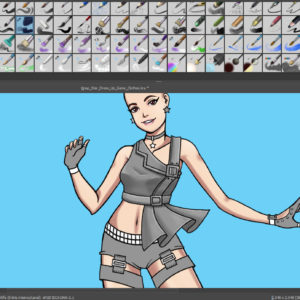 If you are an artist and are having financial difficulties paying for Photoshop, I recommend Krita. For free, it works well and can open Photoshop files without any problems!